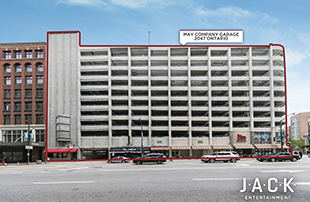 A multi-million dollar construction project is currently underway to update the façade of the May Company Garage. Set to be completed this fall, the structural and aesthetic improvements include repairing the deteriorating concrete, repainting the structure, and replacing street level awnings.

JACK Entertainment and its affiliates acquired the May Company Garage in late 2017. The structure, which was built in 1963, has faced decades of deterioration and prior to JACK ownership, scaffolding was put in place to protect pedestrians from the building’s aging façade. Once the exterior improvements are completed, conditions will allow for the safe removal of the scaffolding.

“As part of our ongoing commitment to Cleveland’s revitalization, we are making significant improvements to the exterior of the recently purchased May Company Garage for the benefit of our tenants and greater downtown visitors,” said Mark Tricano, senior vice president of operations, Northeast Ohio for JACK Entertainment.

Cleveland-based construction company Donley’s Inc. has been named as general contractor of the project. During construction, portions of the garage and sidewalk will need to temporarily close.

The May Company Garage is conveniently located in the heart of downtown Cleveland at the corner of Prospect Avenue and Ontario Street, directly across from the historic Higbee Building which is home to JACK Cleveland Casino. The garage, which features 670 parking spaces and 14,500 square feet of ground floor retail space, is also connected to the nearly one million square feet of real estate that JACK Entertainment’s sister company Bedrock recently acquired.